The Final LIVE IN HOLLAND Sessions – Volumes I & II 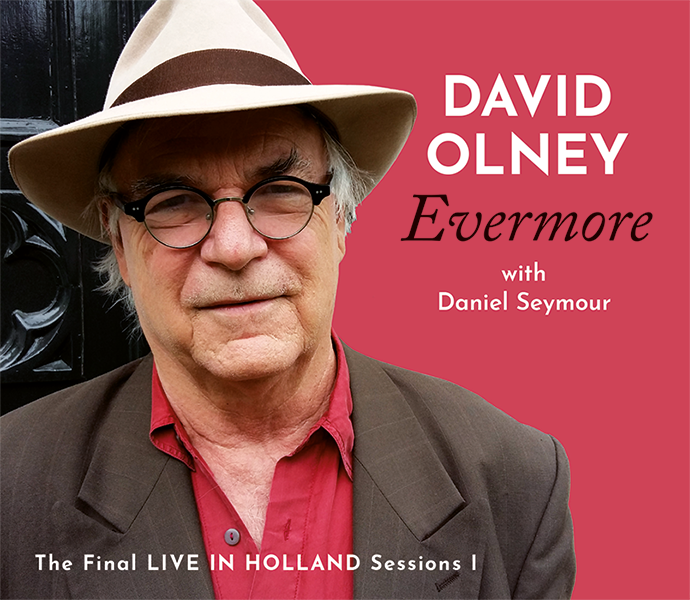 Evermore: Out May 13th 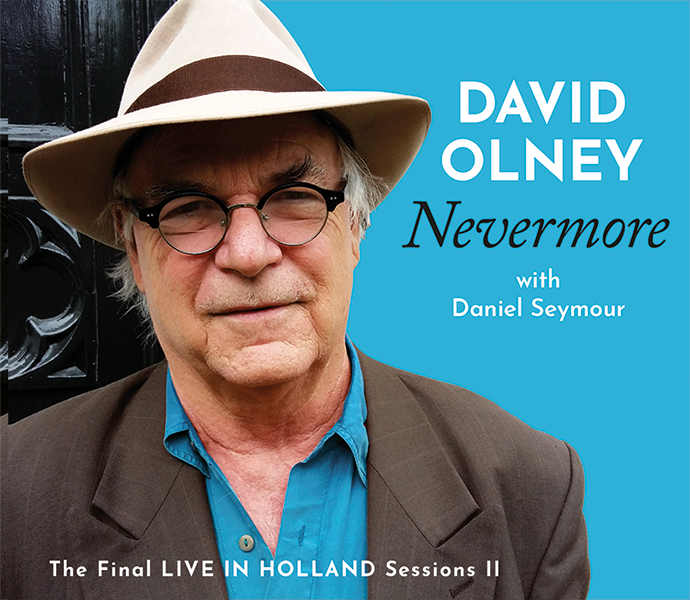 Singer-songwriter David Olney was known worldwide for his indelible songs and powerful live performances prior to his untimely death on stage mid-song at the 30A Songwriter Festival in Santa Rosa Beach, Florida, in January 2020. Evermore, available worldwide May 13, 2022, on CD/Digital, is the penultimate David Olney live recording to be released from the 8-album series presented by Strictly Country Records. The final album, Nevermore, is available worldwide on June 10, 2022, on CD/Digital. Each collection features 15 tracks (with some 2-for-1s!), including several new and previously unreleased songs and other surprises. Both albums feature longtime sideman and co-writer Daniel Seymour accompanying on bass and vocals and were recorded live in 2016 and 2018 while on tour in The Netherlands. These tours were managed and produced by David’s longtime European booking and management representative Joanna Serraris.

“It was in 1990 that Townes Van Zandt informed me about David; “’ This guy is coming to Holland soon; you [need to] go and see him. He is the very best, and I mean what I’m saying.’” – Pieter Groenveld, Founder of Strictly Country Records

Pieter has been recording David Olney’s live concerts in Holland since 1993, including these current Olney and Seymour captures before a live audience at the De Oude Veiling in Aalsmeer, De Zocherlounge in Bloemendaal and the Nic Jonk Statue Garden and Museum in Grootschermer. The recordings are simple, complex, and definitive. Fans will find delight with fresh interpretations of signature songs like “Deeper Well,” “Roses,” and “A Dangerous Man,” along with newer classics, including “This Side Or The Other,” “Thing Of Beauty,” and “Innocent Heart.”

The final two releases also feature four new songs, all co-written with award-winning songwriter (original Smothers Brothers Comedy Hour writer and art professor at University of Oklahoma in Norman, OK) and longtime friend John Hadley, along with one of those tunes co-written with Daniel Seymour. David often said it was important to perform songs done by others, just as others continue to share his music. One new featured track – “Mountain Jackson” – has David interpreting a song written by newcomer Jann Seymour. Also, fans will recognize his homage to The Bee Gees, The Zombies, Buddy Holly, John Prine, and, always, Townes Van Zandt.

“If the form is true, it is strong enough to hold the whole universe.” – David Olney.

Longtime touring partner bassist Daniel Seymour recalls those nights when standing outside the venue:
“ ’On a gig like this, I wouldn’t be surprised if a unicorn came walking by.’ He used that joke several times on these tours, and yes, the gigs were magical. Three key factors are what make a tour successful: the music, the hang, and the show: David Olney was a rare convergence of all three. These songs and this sound represent one of the most important times in my life. David used to say that his songs are like his genes, and in true Darwinian fashion, he felt driven to spread them around the world, ensuring that they would live on forever.”

Over his 40 plus year career, many musical luminaries, including Emmylou Harris, Linda Ronstadt, Steve Earle, Del McCoury, and Townes Van Zandt, all knew of and drew from the universe that was David Olney. He was celebrated, loved, and revered by fans, friends, and loved ones, over his career, and these albums will serve as a deeper well for those who follow him.

“After the first time I recorded a concert in 1993, I asked David if he would like to consider a ‘live’ album of the night before; he’d said, ‘sure.’ This first Live in Holland album worked out well for all. Now, almost 30 years, 6 CDs and a DVD later, we’re going through the 2016 and 2018 recordings to select the tracks for these two last records, Evermore and Nevermore. I feel it’s like a last farewell to a friend, a brother. What a fun collaboration it has been, socially as well as musically,” explains Pieter.

“We will never again have the opportunity, in a real-life situation, to be mesmerized by his voice, by his presence, by his performance, and his talent.” – Joanna Serraris

Americana Pioneer singer-songwriter/poet, stream-caster, and actor David Olney released iconic music for more than four decades and was known worldwide for his indelible songs and powerful live performances. A published poet, Mr. Olney made his Shakespearean acting debut and composed several songs for The Nashville Shakespeare Festival’s 2014 Americana-themed production of “As You Like It,” returning in 2016 with another role and having penned more original music in “The Comedy Of Errors.” David Olney hosted a weekly “You Never Know” Songwriter Series video streamcast for more than ten years on his YouTube channel, where he performed a song and shared the story behind it. His music continues to expand our universe.